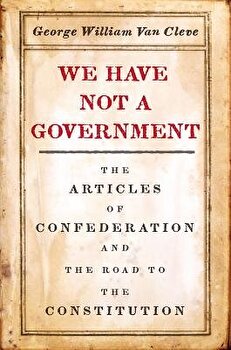 
Description In 1783, as the Revolutionary War came to a close, Alexander Hamilton resigned in disgust from the Continental Congress after it refused to consider a fundamental reform of the Articles of Confederation. Just four years later, that same government collapsed, and Congress grudgingly agreed to support the 1787 Philadelphia Constitutional Convention, which altered the Articles beyond recognition. What occurred during this remarkably brief interval to cause the Confederation to lose public confidence and inspire Americans to replace it with a dramatically more flexible and powerful government? We Have Not a Government is the story of this contentious moment in American history. In George William Van Cleve's book, we encounter a sharply divided America. The Confederation faced massive war debts with virtually no authority to compel its members to pay them. It experienced punishing trade restrictions and strong resistance to American territorial expansion from powerful European governments. Bitter sectional divisions that deadlocked the Continental Congress arose from exploding western settlement. And a deep, long-lasting recession led to sharp controversies and social unrest across the country amid roiling debates over greatly increased taxes, debt relief, and paper money. Van Cleve shows how these remarkable stresses transformed the Confederation into a stalemate government and eventually led previously conflicting states, sections, and interest groups to advocate for a union powerful enough to govern a continental empire. Touching on the stories of a wide-ranging cast of characters--including John Adams, Patrick Henry, Daniel Shays, George Washington, and Thayendanegea--Van Cleve makes clear that it was the Confederation's failures that created a political crisis and led to the 1787 Constitution. Clearly argued and superbly written, We Have Not a Government is a must-read history of this crucial period in our nation's early life. About the Author George William Van Cleve is research professor in law and history at Seattle University School of Law. He is the author of A Slaveholders' Union , also published by the University of Chicago Press. He received his Ph.D. from the University of Virginia, and his J.D. from Harvard Law School.

To Have And Not To Have

To Have and Have Not - Ernest Hemingway

To Have and Have Not - Ernest Hemingway

The 10 Conversations You Must Have Before You Get Married (and How to Have Them), Paperback/Dr Guy Grenier

Yes, Lord, I Have Sinned: But I Have Several Excellent Excuses, Paperback/James W. Moore

To Have and Have Another Revised Edition: A Hemingway Cocktail Companion, Hardcover/Philip Greene

To Have and Have Not, Hardcover/Ernest Hemingway

More: How You Can Have More of the Spirit When You Already Have Everything in Christ, Paperback/Simon Ponsonby

To Have and Have Not

Karlology - What I Have Learnt So Far

You Will Not Have My Hate

We Have a Deal: How to Negotiate with Intelligence, Flexibility and Power

All the Countries the Americans Have Ever Invaded : Making Friends and Influencing People?

How Many Moons Does the Earth Have?

The Famous Five: Five Have Plenty Of Fun: Vol. 14

HOW MANY MOONS DOES THE EARTH HAVE?

I Should Have Said

Seriously Senior Moments : Or, Have You Bought This Book Before?