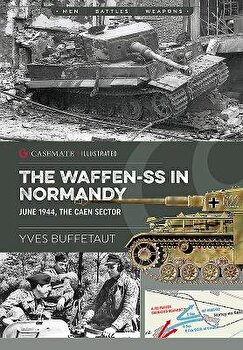 
For many, the Waffen-SS soldier represents the archetype of the combatant, if not the warrior: well-armed, well-trained, possessing intelligence in combat, imbued with political and ideological fanaticism, he is an elite soldier par excellence, even if a lack of scruples casts a long shadow. However, is this picture true? In the case of the Battle of Normandy, opinions diverged, not only among today's historians, but also amongst the German generals at the time. In all, the Waffen-SS fielded six divisions during the Battle of Normandy, as well as two heavy battalions of Tiger tanks. But they were by no means a single homogenous entity, for with the exception of II. SS-Panzerkorps, the divisions arrived at the front one after another and were immediately thrown into battle. This volume in the Casemate Illustrated series examines the Waffen-SS in Normandy during the fierce fighting of June 1944, when they struggled to hold back the Allied advance on Caen, though the picture was by no means one-sided. Extensively illustrated with photographs, tank profiles, maps, and accompanied by biographies of key personnel and explanatory text boxes, this volume gives a clear and accessible account of events, challenging some popular perceptions along the way.