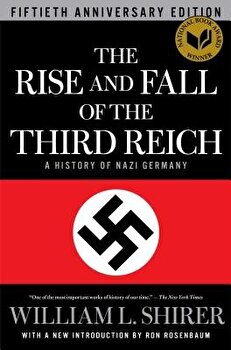 The Rise and Fall of the Third Reich: A History of Nazi Germany, Paperback/William L. Shirer


Hailed as "one of the most important works of history of our time" ( The New York Times ), this definitive chronicle of Hitler's rise to power is back in hardcover with a new introductory essay by Ron Rosenbaum ( Explaining Hitler and How the End Begins ) commemorating the fiftieth anniversary of its National Book Award win. The fiftieth anniversary edition of the National Book Award-winning bestseller that is the definitive study of Adolf Hitler, the rise of Nazi Germany, the Holocaust, and World War II. This special edition now features a new introduction by Ron Rosenbaum, author of Explaining Hitler and How the End Begins .