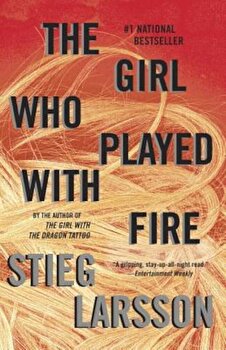 The Girl Who Played with Fire: Book 2 of the Millennium Trilogy, Paperback/Stieg Larsson


Part blistering espionage thriller, part riveting police procedural, and part piercing expose on social injustice, this second book in the Millennium series is a masterful, endlessly satisfying novel. Look for The Girl Who Takes an Eye for an Eye featuring Lisbeth Salander, coming September 12th. Mikael Blomkvist, crusading publisher of the magazine Millennium , has decided to run a story that will expose an extensive sex trafficking operation. On the eve of its publication, the two reporters responsible for the article are murdered, and the fingerprints found on the murder weapon belong to his friend, the troubled genius hacker Lisbeth Salander. Blomkvist, convinced of Salander's innocence, plunges into an investigation. Meanwhile, Salander herself is drawn into a murderous game of cat and mouse, which forces her to face her dark past.

A Smart Girl's Guide: Liking Herself: Even on the Bad Days, Paperback/Laurie E. Zelinger

A Smart Girl's Guide: Sports & Fitness: How to Use Your Body and Mind to Play and Feel Your Best, Paperback/Therese Kauchak Maring

A Smart Girl's Guide: Worry: How to Feel Less Stressed and Have More Fun, Paperback/Judith Woodburn

A Smart Girl's Guide: Knowing What to Say: Finding the Words to Fit Any Situation, Paperback/Patti Kelley Criswell

A Smart Girl's Guide: Cooking: How to Make Food for Your Friends, Your Family & Yourself, Paperback/Patricia Daniels

A Smart Girl's Guide: Friendship Troubles: Dealing with Fights, Being Left Out, and the Whole Popularity Thing, Paperback/Patti Kelley Criswell

Learning to Love the Girl in the Mirror: A Teenage Girl's Guide to Living a Happy and Healthy Life, Paperback/Helena Grace Donald

Girl to Girl: Honest Talk about Growing Up and Your Changing Body, Paperback/Sarah O'Leary Burningham