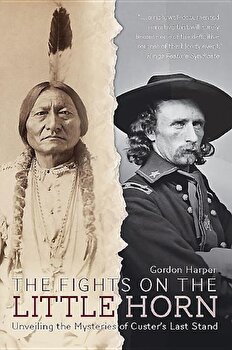 
Winner of the 2014 John Carroll Award, presented annually by The Little Big Horn Associates, as their Literary Award for the best book/monograph during the preceding year. Winner 2014 G. Joseph Sills Jr. Book Award This remarkable book synthesizes a lifetime of in-depth research into one of America's most storied disasters, the defeat of Custer's 7th Cavalry at the hands of the Sioux and Cheyenne Indians, as well as the complete annihilation of that part of the cavalry led by Custer himself. The author, Gordon Harper, spent countless hours on the battlefield itself as well as researching every iota of evidence of the fight from both sides, white and Indian. He was thus able to recreate every step of the battle as authoritatively as anyone could, dispelling myths and falsehoods along the way. Harper himself passed away in 2009, leaving behind nearly two million words of original research and writing. In this book his work has been condensed for the general public to observe his key findings and the crux of his narrative on the exact course of the battle. One of his first observations is that the fight took place along the Little Horn River--its junction with the Big Horn was several miles away so that the term for the battle, ``Little Big Horn`` has always been a misnomer. He precisely traces the mysterious activities of Benteen's battalion on that fateful day, and why it could never come to Custer's reinforcement. He describes Reno's desperate fight in unprecedented depth, as well as how that unnerved officer benefited from the unexpected heroism of many of his men. Indian accounts, ever-present throughout this book, come to the fore especially during Custer's part of the fight, because no white soldier survived it. However, analysis of the forensic evidence--tracking cartridges, bullets, etc., discovered on the battlefield--plus the locations of bodies assist in drawing an accurate scenario of how the final scene unfolded. It may indeed be clearer now than it was to the doomed 7th Cavalrymen at the time, who through the dust and smoke and Indians seeming to rise by hundreds from the ground, only gradually realized the extent of the disaster. Of additional interest is the narrative of the battlefield after the fight, when successive burial teams had to be dispatched for the gruesome task, because prior ones invariably did a poor job. Though author Gordon Harper is no longer with us, his daughter Tori Harper, along with author/historians Gordon Richard and Monte Akers, have done yeoman's work in preserving his valuable research for the public.