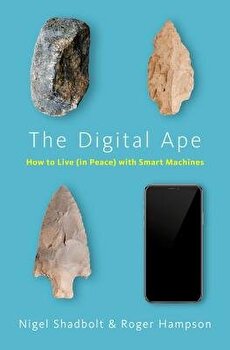 
Description The smart-machines revolution is reshaping our lives and our societies. Here, Sir Nigel Shadbolt, one of the world's leading authorities on artificial intelligence, and Roger Hampson dispel terror, confusion, and misconception. We are not about to be elbowed aside by a rebel army of super-intelligent robots of our own creation. We were using tools before we became Homo sapiens , and will continue to build and master them, no matter how complicated they become. How we exercise that control--in our private lives, in employment, in politics--and make the best of the wonderful opportunities, will determine our collective future well-being. Chapter by chapter, The Digital Ape outline how our choices and the use and adaptation of the tools we've created can lead to opportunities for the environment (both built and natural), health, and our security. Shadbolt and Hampson are uniquely well-suited to draw on historical precedent and technical know-how to offer a vision of the future that is exciting, rather than nerve-wracking, to contemplate. About the Author Sir Nigel Shadbolt is one of the world's foremost computer scientists. He is a leading researcher in artificial intelligence and was one of the originators of the interdisciplinary field of web science. He is Principal of Jesus College Oxford and a Professor of Computer Science at the University of Oxford. He is chairman of the Open Data Institute which he co-founded with Sir Tim Berners-Lee. He is a Fellow of the Royal Society, the Royal Academy of Engineering, a Fellow and former President of the British Computer Society. Roger Hampson is an academic and public servant. He was chief executive of the London Borough of Redbridge for 16 years until early 2016. Until 1986, he was an academic economist of social policy, latterly research fellow at the Personal Social Services Research Unit at the University of Kent.