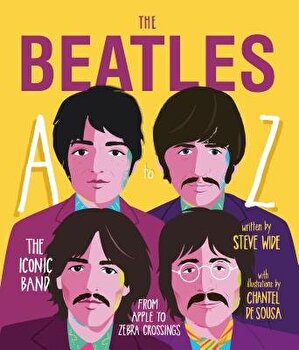 The Beatles A to Z: The Iconic Band - From Apple to Zebra Crossings, Hardcover/Steve Wide


Description An illustrated A to Z celebrating the unparalleled impact of the cultural phenomenon that was the Beatles--the greatest band of all time. This book looks at the life, art, collaborations, films, friendships, and fun surrounding the Fab Four--all in a brilliantly illustrated A to Z format. From their early days playing all-night sets in Hamburg and Liverpool, through the mop-top era and the height of the British Invasion, to experimentation in India and elevating pop music into an art form, the Beatles remain unrivalled in their effect on music and culture. This book is a glimpse into the lives of John, Paul, George, and Ringo: iconic and psychedelic albums; the hit singles; the producer George Martin's contributions to the music industry; and the eternal phenomenon of Beatlemania. About the Author Steve Wide is a DJ and writer who hosts a long-running British music radio show. He has run many legendary club nights and has interviewed countless artists, from Noel Gallagher to Björk. Steve's previous titles include Bowie A to Z, Prince A to Z, and Grace Jones A to Z .