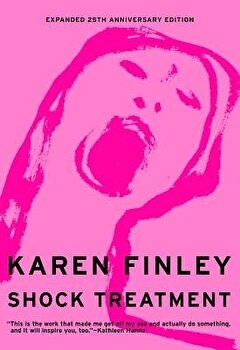 
"If you haven't read this book yet--buy it, take it home, and read it now This is the work that made me get off my ass and actually do something, and it will inspire you, too."--Kathleen Hanna, singer, Bikini Kill, Le Tigre and The Julie Ruin "I believe Karen Finley's un-careful rage was threatening because it is filled with grief, humor, and a profound passion for this life. Rereading it, I feel refreshed, as if I've been self-policing for years by tolerating boring, stupid things and now I'm free again. Thank you, Karen."--Miranda July, author of The First Bad Man " Shock Treatment is as timely and crucial as ever, inspiring feminist rage and wildness just as when it first blew my mind twenty-five years ago."--Michelle Tea, author of How to Grow Up "Karen Finley is an iconoclast who, ironically, became an icon when her work in Shock Treatment was targeted by right wing politicians. This important book is as necessary and vital today as it was twenty-years ago."--Sapphire, author of Push , among other works "Reading Shock Treatment today reminds me that Karen Finley has always been a writer of conscience. I remember seeing and hearing her read "The Black Sheep" off a piece of legal paper in the middle of a play at The Kitchen. No frills. She simply re-invented the poem."--Eileen Myles, author of Snowflake/different streets "How exciting for you, me, Karen, and the world--to have an occasion to revisit this period of powerful and earth-shaking work. Culture wars? Those bastards had no idea what they were up against."--Justin Vivian Bond, author of Tango: My Childhood, Backwards and in High Heels "Finley's Shock Treatment is more than just 'art.' It remains a searing and necessary indictment of America, a call to arms, a great protest against the injustices waged on queers and women during a time in recent American history where government intervention and recognition was so desperately needed. Twenty-five years on, Finley's work continues to shock and provoke readers and audiences, demonstrating the powerful cultural and political impact her work has had on modern American art and performance art."--Nathan Smith, Los Angeles Review of Books No other artist captures the drama and fragility of the AIDS era as Karen Finley does in her 1990 classic book Shock Treatment . "The Black Sheep," "We Keep Our Victims Ready," "I Was Never Expected to Be Talented,"--these are some of the seminal works which excoriated homophobia and misogyny at a time when artists and writers were under attack for challenging the status quo. This twenty-fifth anniversary expanded edition features a new introduction in which Finley reflects on publishing her first book as she became internationally known for being denied an NEA grant because of perceived obscenity in her work. She traces her journey from art school to burlesque gigs to the San Francisco North Beach literary scene. A new poem reminds us of Finley's disarming ability to respond to the era's most challenging issues with grace and humor. KAREN FINLEY's raw and transgressive performances have long provoked controversy and debate. She has appeared and exhibited her visual art, performances, and plays internationally. The author of many books including A Different Kind of Intimacy , George & Martha , and The Reality Shows , she is a professor at the Tisch School of Art and Public Policy at NYU. About the Author: Karen Finley is a New York-based artist whose performances have long provoked controversy and debate. Her performances have been presented at the Lincoln Center (NY), the Guthrie (Minneapolis), American Repertory Theater (Harvard), the ICA (London), the Steppenwolf (Chicago), and the Bobino (Paris). Her artworks are in numerous collections and museums including the Pompidou in Paris and the Museum of Contemporary Art, Los Angeles. Finley attended the San Francisco Art Institute receiving an MFA and an honorary PhD. She has received numerous awards and fellowships including a Guggenheim Fellowship, two Obies, two Bessies, Ms. Magazine Woman Of The Year Award, NARAL Person of the Year Award, and NYSCA and NEA Fellowships. She has appeared in many independent films, including Jonathan Demme's 1993 Oscar-winning film Philadelphia. She has written and/or edited eight books including Shock Treatment (City Lights, 1990), Enough is Enough (Poseidon, Simon and Schuster, 1993), Living It Up (Doubleday, 1996), Pooh Unplugged (Smart Art Books, 1999), A Different Kind Of Intimacy: The Collected Writings of Karen Finley (Thunders Mouth Press, 2000), George and Martha (Verso, 2006), and Reality Shows (Feminist Press, 2011). Current projects include Open Heart (a public memorial for children killed during the Holocaust created in collaboration with survivors, children, and locals). Finley is a professor at T

Peggy Guggenheim - The Shock of the Modern | Francine Prose

The Shock Doctrine: The Rise of Disaster Capitalism, Paperback/Naomi Klein

Burn-Up or Splash Down: Surviving the Culture Shock of Re-Entry, Paperback/Marion Knell

The Shock of the Old: Technology and Global History Since 1900, Paperback/David Edgerton

The Shock of the Anthropocene: The Earth, History and Us, Paperback/Christophe Bonneuil