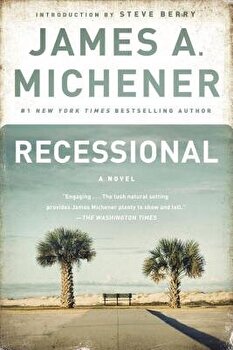 
In this remarkable novel, Pulitzer Prize-winning author James A. Michener draws on his unparalleled gift for storytelling, his deep understanding of American society, and his own life experiences to illuminate the challenges of aging and the folly of youth. As the new director of a Florida retirement home known as the Palms, Andy Zorn suffers no shortage of loving support from his "elders," a group of five passionate, outspoken residents. Still, Andy's shortcomings tear him apart. But when he meets an extraordinary young woman who has been forced to rebuild her life after suffering crippling injuries, he finds himself falling in love. And with a few gentle jabs from his more mature friends, he discovers a wonderful new purpose in life. Praise for Recessional "The best moments in the novel occur when the characters disclose what's in their hearts and minds with rueful, snappy humor." -- The New York Times Book Review "Michener hooks you with wonderfully humorous scenes. These are then interwoven between the moments of pain and heartache brought about by life choices we all must make." -- Tulsa World "Engaging . . . One will be drawn into the novelist's world. . . . The lush natural setting provides James Michener plenty to show and tell." -- The Washington Times From the Hardcover edition. About the Author: James A. Michener was one of the world's most popular writers, the author of more than forty books of fiction and nonfiction, including the Pulitzer Prize-winning Tales of the South Pacific, the bestselling novels The Source, Hawaii, Alaska, Chesapeake, Centennial, Texas, Caribbean, and Caravans, and the memoir The World Is My Home . Michener served on the advisory council to NASA and the International Broadcast Board, which oversees the Voice of America. Among dozens of awards and honors, he received America's highest civilian award, the Presidential Medal of Freedom, in 1977, and an award from the President's Committee on the Arts and Humanities in 1983 for his commitment to art in America. Michener died in 1997 at the age of ninety.