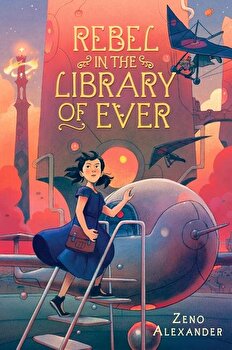 Rebel in the Library of Ever, Hardcover/Zeno Alexander


Description The follow-up to Zeno Alexander's acclaimed middle-grade fantasy The Library of Ever features a dangerous takeover of the magical Library as our heroine fights to make knowledge free for everyone. Lenora returns to the magical Library--which holds every book ever known on its shelves. But she discovers the Library is under new management, its incredible rooms and corridors turned dark and sinister. She quickly connects with a secret resistance that's trying to free knowledge from the shadows threatening it. Her new friends introduce her to an ancient lost city, hang-gliding, and mathematical beings larger than the universe itself. And they help her face the mysterious Board of new leaders--who are leading the Library into darkness. Now it's up to Lenora to prove that knowledge is always more powerful than ignorance and fear. An Imprint Book Praise for The Library of Ever "Unusually clever ." -- Kirkus Reviews , starred review "Zeno Alexander's The Library of Ever reads like someone mixed Neil Gaiman with Chris Grabenstein , then threw in an extra dash of charm. Reading it is like getting lost in an entire library full of books, and never wanting to leave " --James Riley, New York Times bestselling author of the Story Thieves series "Full of whimsy and pluck, The Library of Ever is a total delight " --Wendy Mass, New York Times bestselling author About the Author After emerging from the shadows of the past, his history yet to be fully explained, Zeno Alexander spent years exploring the world's libraries before settling down in his lavish underground bunker, where he regularly hosts exquisite dinner parties and tends to his collection of extinct plants. His friendship with the famous librarian, Lenora, has turned into a series of biographical works devoted to chronicling her adventures.