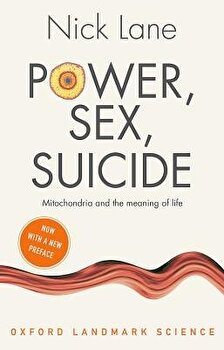 
Description Mitochondria are tiny structures located inside our cells that carry out the essential task of producing energy for the cell. They are found in all complex living things, and in that sense, they are fundamental for driving complex life on the planet. But there is much more to them than that. Mitochondria have their own DNA, with their own small collection of genes, separate from those in the cell nucleus. It is thought that they were once bacteria living independent lives. Their enslavement within the larger cell was a turning point in the evolution of life, enabling the development of complex organisms and, closely related, the origin of two sexes. Unlike the DNA in the nucleus, mitochondrial DNA is passed down exclusively (or almost exclusively) via the female line. That's why it has been used by some researchers to trace human ancestry daughter-to-mother, to 'Mitochondrial Eve'. Mitochondria give us important information about our evolutionary history. And that's not all. Mitochondrial genes mutate much faster than those in the nucleus because of the free radicals produced in their energy-generating role. This high mutation rate lies behind our ageing and certain congenital diseases. The latest research suggests that mitochondria play a key role in degenerative diseases such as cancer, through their involvement in precipitating cell suicide. Mitochondria, then, are pivotal in power, sex, and suicide. In this fascinating and thought-provoking book, Nick Lane brings together the latest research findings in this exciting field to show how our growing understanding of mitochondria is shedding light on how complex life evolved, why sex arose (why don't we just bud?), and why we age and die. This understanding is of fundamental importance, both in understanding how we and all other complex life came to be, but also in order to be able to control our own illnesses, and delay our degeneration and death. Oxford Landmark Science books are 'must-read' classics of modern science writing which have crystallized big ideas, and shaped the way we think. About the Author Nick Lane, Professor of Evolutionary Biochemistry, University College London Nick Lane is a British biochemist and writer. He was awarded the first Provost's Venture Research Prize in the Department of Genetics, Evolution, and Environment at University College London, where he is now Professor of Evolutionary Biochemistry. Professor Lane's research deals with evolutionary biochemistry and bioenergetics, focusing on the origin of life and the evolution of complex cells. He was a founding member of the UCL Consortium for Mitochondrial Research, and is leading the UCL Research Frontiers Origins of Life programme. He was awarded the 2011 BMC Research Award for Genetics, Genomics, Bioinformatics and Evolution, and the 2015 Biochemical Society Award for his sustained and diverse contribution to the molecular life sciences and the public understanding of science. His books include Oxygen: The Molecule that Made the World (OUP, 2002; 2016).

We Are Our Brains: A Neurobiography of the Brain, from the Womb to Alzheimer's, Hardcover/D. F. Swaab

On the Origin of the Species, Hardcover/Charles Darwin

Why Dogs Hump and Bees Get Depressed: The Fascinating Science of Animal Intelligence, Emotions, Friendship, and Conservation, Paperback/Marc Bekoff

Woolly: The True Story of the Quest to Revive History's Most Iconic Extinct Creature, Paperback/Ben Mezrich

Orca: How We Came to Know and Love the Ocean's Greatest Predator, Hardcover/Jason M. Colby

Riddled with Life: Friendly Worms, Ladybug Sex, and the Parasites That Make Us Who We Are, Paperback/Marlene Zuk

Bonk: The Curious Coupling of Science and Sex, Paperback/Mary Roach

How Sex Works: Why We Look, Smell, Taste, Feel, and ACT the Way We Do, Paperback/Sharon Moalem

Paleofantasy: What Evolution Really Tells Us about Sex, Diet, and How We Live, Paperback/Marlene Zuk

Dr. Tatiana's Sex Advice to All Creation: The Definitive Guide to the Evolutionary Biology of Sex, Paperback/Olivia Judson