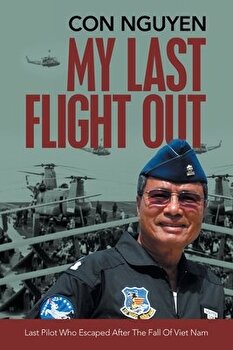 My Last Flight Out: Last Pilot Who Escaped After the Fall of Viet Nam, Paperback/Con Nguyen


""My Last Flight Out"" is a real story from one of the last pilots (the author) who escaped Viet Nam, a day after the new South Vietnamese government unconditionally surrendered on April 30, 1975. It was a riskiest attempted escape during the country in a chaotic situation a day after American evacuated Saigon. The author traded death for life in his series of actions to do-or-die. Fortunately, he saved not only his life but also his family and about the other 80 women and children left on the remote island Con Son in the last hours. He picked them up and flew his Chinook one-way-out without return to the Pacific Ocean and landed on USS Okinawa carrier at the end of April 30, 1975. ""My last Flight Out"" is an incredible long survival journey against overwhelming all odds. The story of selfless military leadership with guts, creativities, and perseverance overcame death to live. It is an extraordinary true story of the long and hard surviving journey after the war.

The Gun Behind the Camera: A Cop's Experience of Thirty-Four Years in Merv Griffin's Television World, Paperback/Albert C. ace Miller

Together Through Life: A Personal Journey with the Music of Bob Dylan, Paperback/Chris Morris

TROUBLES AND TRIALS On Upper Buffalo Creek: Tales of Feuds, Shootouts, and Murders in Owsley County, Kentucky in the early 20th century and trials of, Paperback/Michael Dean

All Is Calm: A Maine Christmas Reader, Paperback/Shannon Butler

The Twisted Book Of Shadows, Paperback/James a. Moore

The Heart and the Abyss: The Life of Felice Benuzzi, Paperback/Rory Steele

The Outlaw Bank: A Wild Ride Into the Secret Heart of Bcci, Paperback/Jonathan Beaty

Dante: The Poet, the Political Thinker, the Man, Paperback/Barbara Reynolds

Losing My Religion: A Call for Help, Paperback/Jeffrey Lang

Roads of the Roma. A PEN Anthology of Gypsy Writers, Paperback/***

A Cast-Iron Aeroplane That Can Actually Fly: Commentaries from 80 Contemporary American Poets on Their Prose Poetry, Paperback/Peter Johnson

Beauty Of The Husband, Paperback/Anne Carson