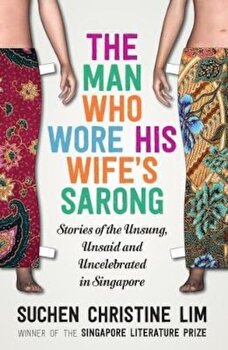 
A toilet cleaner is forced to borrow from a loan shark to save her HIV infected son; a private-eye who channels Monkey God discovers the dark secret between her adoptive father and sister; a mother finds out her son is gay; a daughter struggles to accept her two lesbian mothers; a niece stumbles upon the body of her uncle dressed in his wife's sarung kebaya; and an elderly father's nascent feelings for the daughter's Filipino maid leads him to his suppressed art, and a prostitute finds self-worth and dignity. In The Man Who Wore His Wife's Sarong Singapore Literature Prize winner Suchen Christine Lim tells stories of the unsaid, unsung and uncelebrated that strip off the mask of Singapore's prosperity and coded decorum to reveal the prejudices, tensions and taboos in families.

Man Up!: The Real Man's Book of Manly Knowledge