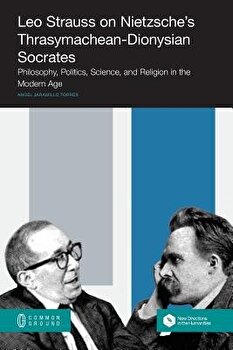 
Description In probing Leo Strauss' interpretation of Nietzsche's political philosophy, this work shows that Strauss' Nietzsche is a philosopher who, while committed to the contemplative life, launched a theological-political project aimed at emancipating human beings from ecclesiastical tutelage, while laying the groundwork for planetary justice based on a new understanding of the human predicament in the conditions of late modernity. Pace the dominant interpretations of Nietzsche, it argues that Strauss reads Nietzsche as providing an understanding of the political problem in light of the intention of the philosopher as philosopher.. This work maintains that, properly understood, Strauss' interpretation of Nietzsche shows how it also depicts the friendship achieved by Socrates and Thrasymachus in The Republic. By putting forward the philosophy of the will to power, Strauss' Nietzsche advanced the Thrasymachean idea that the philosophers are "commanders and legislators." This is the meaning of Nietzsche's "philosophers of the future," who have the responsibility of the fate of mankind upon their shoulders. The Thrasymachean philosophy as the will to power is Nietzsche's political action aimed at both emancipating man from ecclesiastical tutelage, and defending the philosophical way of life. In contradistinction, the thought of the "eternal return of the same" points to a conception of philosophy as "contemplative" rather than "legislative." The contemplative disposition takes its bearings from the acceptance of the world as it is rather than as political actions aimed at transforming it. Thus, in a way, the thought of the eternal return belies the thought of the will to power.

The Everything Etiquette Book: A Modern-Day Guide to Good Manners, Paperback/Leah Ingram

Art of Reasoning: An Introduction to Logic and Critical Thinking, Paperback/David Kelley

Hydroponics: The Complete Guide to Start Your Own Hydroponic Garden. Learn How to Build a Hydroponics System for Homegrown Organic, Paperback/James Urban

The UFO Enigma: A New Review of the Physical Evidence/Peter a. Sturrock

Gardens in My Life, Hardback/Arabella Lennox-Boyd

Degree in a Book: Cosmology. Everything You Need to Know to Master the Subject - in One Book!, Paperback/Dr Sten Odenwald

The Ultimate Thread Guide. Everything You Need to Know to Choose the Perfect Thread for Every Project, Paperback/Becky Goldsmith