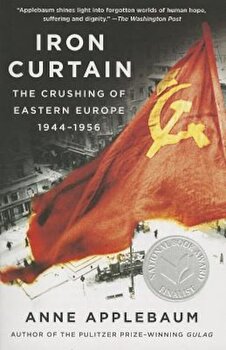 
National Book Award Finalist TIME Magazine's #1 Nonfiction Book of 2012 A New York Times Notable Book A Washington Post Top Ten Book of 2012 Best Nonfiction of 2012: The Wall Street Journal , The Plain Dealer In the much-anticipated follow-up to her Pulitzer Prize-winning Gulag , acclaimed journalist Anne Applebaum delivers a groundbreaking history of how Communism took over Eastern Europe after World War II and transformed in frightening fashion the individuals who came under its sway. Iron Curtain describes how, spurred by Stalin and his secret police, the Communist regimes of Eastern Europe were created and what daily life was like once they were complete. Drawing on newly opened East European archives, interviews, and personal accounts translated for the first time, Applebaum portrays in chilling detail the dilemmas faced by millions of individuals trying to adjust to a way of life that challenged their every belief and took away everything they had accumulated. As a result the Soviet Bloc became a lost civilization, one whose cruelty, paranoia, bizarre morality, and strange aesthetics Applebaum captures in these electrifying pages.

The Wall: Growing Up Behind the Iron Curtain, Hardcover/Peter Sis

Why Am I So Angry?, Paperback/Debi Pryde

Exposing the Hidden Dangers of Iron: What Every Medical Professional Should Know about the Impact of Iron on the Disease Process, Paperback/E. D. Weinberg

Once Upon a Zombie: Book Two: The Lord of the Curtain, Hardcover/Billy Phillips