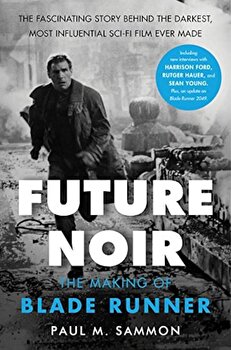 
Rediscover the groundbreaking magic of Blade Runner with this revised and updated edition of the classic guide to Ridley Scott's transformative film--and published in anticipation of its sequel, Blade Runner 2049 , premiering October 2017 and starring Ryan Gosling, Jared Leto, Robin Wright, and Harrison Ford. Ridley Scott's 1992 ``Director's Cut`` confirmed the international film cognoscenti's judgment: Blade Runner , based on Philip K. Dick's brilliant and troubling science fiction masterpiece Do Androids Dream of Electric Sheep?, is the most visually dense, thematically challenging, and influential science fiction film ever made. Future Noir offers a deeper understanding of this cult phenomenon that is storytelling and visual filmmaking at its best. In this intensive, intimate and anything-but-glamorous behind-the-scenes account, film insider and cinephile Paul M. Sammon explores how Ridley Scott purposefully used his creative genius to transform the work of science fiction's most uncompromising author into a critical sensation, a commercial success, and a cult classic that would reinvent the genre. Sammon reveals how the making of the original Blade Runner was a seven-year odyssey that would test the stamina and the imagination of writers, producers, special effects wizards, and the most innovative art directors and set designers in the industry at the time it was made. This revised and expanded edition of Future Noir includes: An overview of Blade Runner 's impact on moviemaking and its acknowledged significance in popular culture since the book's original publication An exploration of the history of Blade Runner: The Final Cut and its theatrical release in 2007 An up-close look at its long-awaited sequel Blade Runner 2049 A 2007 interview with Harrison Ford now available to American readers Exclusive interviews with Rutger Hauer and Sean Young A fascinating look at the ever-shifting interface between commerce and art, illustrated with production photos and stills, Future Noir provides an eye-opening and enduring look at modern moviemaking, the business of Hollywood, and one of the greatest films of all time.