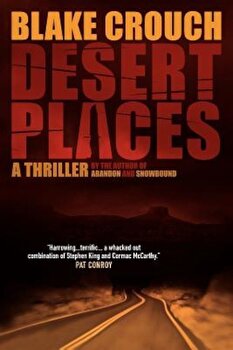 
"GREETINGS. THERE IS A BODY BURIED ON YOUR PROPERTY, COVERED IN YOUR BLOOD. THE UNFORTUNATE YOUNG LADY'S NAME IS RITA JONES. IN HER JEANS POCKET YOU'LL FIND A SLIP OF PAPER WITH A PHONE NUMBER ON IT. CALL THAT NUMBER. IF I HAVE NOT HEARD FROM YOU BY 8:00 P.M., THE POLICE WILL RECEIVE AN ANONYMOUS CALL. I'LL TELL THEM WHERE RITA JONES IS BURIED ON YOUR PROPERTY, HOW YOU KILLED HER, AND WHERE THE MURDER WEAPON CAN BE FOUND IN YOUR HOUSE. (I DO BELIEVE A PARING KNIFE IS MISSING FROM YOUR KITCHEN.) I STRONGLY ADVISE AGAINST GOING TO THE POLICE, AS I AM ALWAYS WATCHING YOU." Andrew Z. Thomas is a successful writer of suspense thrillers, living the dream at his lake house in the piedmont of North Carolina. One afternoon in late spring, he receives a bizarre letter that eventually threatens his career, his sanity, and the lives of everyone he loves. A murderer is designing his future, and for the life of him, Andrew can't get away. About the Author: BLAKE CROUCH was born near the piedmont town of Statesville, North Carolina in 1978. He attended the University of North Carolina at Chapel Hill and graduated in 2000 with degrees in English and Creative Writing. Blake is the author of four novels and numerous short stories. He lives with his family in southwest Colorado, where he is at work on a new book. His website is www.blakecrouch.com. PRAISE FOR DESERT PLACES... Harrowing...terrific...a whacked out combination of Stephen King and Cormac McCarthy. PAT CONROY Crouch's smart, tight prose displays plenty of narrative energy... he] shows real talent here... PUBLISHERS WEEKLY An ingenious, diabolical debut that calls into question all our easy moral assumptions. DESERT PLACES is a genuine thriller that pulses with adrenaline from start to finish. Blake Crouch is one of the most exciting new writers I've read in years. VAL MCDERMID DESERT PLACES is about survival, both emotional and physical. Crouch delivers his description of place with telling and vivid prose... and his] carefully crafted characters make the story immediate, intense and thoroughly believable...will linger in thereader's] consciousness long after the book is read. DENVER POSTT]he fastest, meanest read I've had in quite a while. Crouch clamps on and propels you forward, even though you're not at all sure you want to go into the disturbing places where he's taking you. THE CAPITAL TIMES Wow. Sometimes you stumble across a book that just plain creeps you out. There are many types of DESERT PLACES, and the most inhospitable are in the human heart. ROCKY MOUNTAIN NEWST]wisted...surprises around every turn...don't climb in if you have a heart condition, high blood pressure, might be pregnant, or are under four feet tall. IREDELL CITIZEN Crouch maintains a roller-coaster pace, with twists that leave you blinking. THE CHARLOTTE OBSERVERCrouch's] writing is sick, and I mean that in the very best way. If DESERT PLACES is any indication of what we can expect from Crouch in the future, be prepared to see his name on the bestseller lists. OTTAWA SUN This is a complex, cleverly constructed novel of motive, and Crouch takes his time bringing us through the story...it's a great debut. Crouch is an author to watch. THE GLOBE AND MAIL (TORONTO) Two hundred and eighty pages of pure, lean thriller...prose that's throat grabbing...Blake Crouch is a major league talent who's going to be really, really big. SARAH WEINMAN, Gumshoe-Award Winning Crime ColumnistC]arried by rich, image-filled prose. Crouch will handcuff you, blindfold you, throw you in the trunk of a car, and drag you kicking and screaming through a story so intense, so emotionally packed, that you will walk away stunned. WINSTON-SALEM JOURNAL