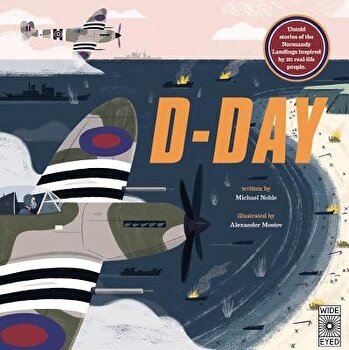 
Description Relive the events of June 6, 1944, through eye witness accounts that describe 20 real-life stories from the D-Day landings. This book--which presents collated photographs, personal accounts, and testimonies from all sides with full-page illustrations dramatizing individual roles--brings a key moment in history to life for young readers hearing about the event for the first time, as we commemorate its 75th anniversary. Meet: Company Sergeant Major Stanley Hollis, the only person to receive the Victoria Cross for their actions that day Lt. Richard Winter, among the first to be parachuted into action (as depicted in Band of Brothers) American journalist Martha Gellhorn, the only woman known to have been present, after disguising herself as a stretcher bearer As well as a host of other inspiring individuals who each played an important part in the turning point of World War II From those involved in reconnaissance , planning and logistics , espionage , and development of new technology , through to the military units involved in the invasion and landings , and the subsequent phases of the invasion, this authentic retelling provides a view from every angle of the action. About the Author Author and academic Michael Noble runs the Centre for Hidden Histories, a military history Engagement Centre, which aims to interact with and support communities as they seek to commemorate and reflect upon events of the 20th century. It has a particular interest in the legacies of war on diverse communities, remembrance and commemoration, and identity. Seattle-based Alexander Mostov is an illustrator whose work has been featured by Google, Facebook, and the Columbus Museum of Art.