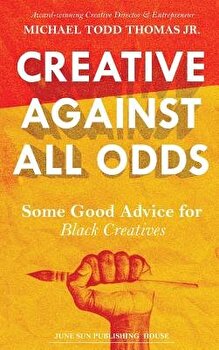 Creative Against All Odds: Some Good Advice for Black Creatives, Hardcover/Michael Todd Thomas


. For Michael Todd Thomas Jr., an creative entrepreneur, navigating an industry full of barriers and gatekeepers has been the only way to capture his dreams. His unorthodox and often improvised approach to the creative hustle has granted him success and now he wants to share it with any creative of color willing to listen. Towered over Michael Todd Thomas Jr. childhood through his adulthood, Michael discovered that being a creative entrepreneur was not a matter of talent, but a matter of know how. Now, twenty-eight years later, award-winning talent and hustle, Michael Todd Thomas Jr. has created a masterpiece for creative entrepreneurs of color in a easy read 30,000-word book, Creative Against All Odds: Some Good Advice for Black Creatives. Using and first-person narration, the author draws an intimate portrait of life as black designer struggling to land a job in a very white creative industry, Michael, who possessed all the talent didn't have the connections to even land a job after applying to 128 companies. Rather get down about it he would go own to start his own agency, and that eventually won over the industry success. Like many black creatives it is a struggle finding employment in the advertising, tech, fashion, and other cool creative jobs--Michael had to navigate the maze of the creative industry strategically, which remains very prejudice to this day, ultimately overlooking the thousands of talented black creators. But Creative against All Odds provides hope and guidance for those affected by the bias system. In the end, Michael decided to use his street smarts, God-given talent and hustle to create a thriving creative business and career. In 2017, Michael Thomas's creative agency won several awards from American Marketing Association, Hermes Creative Awards, Addy's, etc. His company also doubled its yearly profit from the previous year. His ala mater awarded him their 40 under 40 award, and he created a network of opportunity that has already created several jobs for creatives of color. He was named on of Houston's top 100 young professionals by the Young Houston Magazine. His festival have received great praise from local news outlets such as the Chronicle, and Channel 39.

Creative Lampwork: Techniques and Projects for the Art of Melting Glass, Paperback/Joan Gordon

101 Kids Activities That Are the Bestest, Funnest Ever!: The Entertainment Solution for Parents, Relatives & Babysitters!, Paperback/Holly Homer

Creating Wooden Boxes on the Scroll Saw: Patterns and Instructions for Jewelry, Music, and Other Keepsake Boxes, Paperback/Editors of Scroll Saw Woodworking & Craf

Coloring with Your Octopus: A Coloring Book for Domesticated Cephalopods, Paperback/Brian Kesinger

Fairies - A Coloring Book for Grownups and All Ages: Featuring 25 Pages of Mystical Fairies, Flower Fairies and Fairies and Their Friends! Suitable fo, Paperback/Molly Harrison