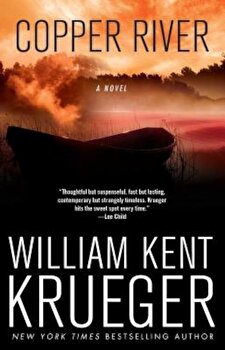 
Two-time Anthony Award-winning author William Kent Krueger has ``moved to the head of the crime fiction class`` ( Chicago Sun-Times ) with his gripping series featuring Sheriff Cork O'Connor. In Copper River , Cork is running for his life -- and straight into a murderous conspiracy involving teenage runaways. Desperately avoiding the clutches of professional hit men who have already put a bullet in his leg, Cork finds sanctuary outside the small Michigan town of Bodine. But while he's hiding out in an old resort owned by his cousin Jewell DuBois, a bitter widow with a fourteen-year-old son named Ren, the body of a young girl surfaces along the banks of the Copper River -- and then another teenager vanishes. Instead of thwarting his assassins, Cork focuses on tracking a ring of killers who prey on innocent children -- before anyone else falls victim. But as his deadly followers close in, Cork realizes he's made an error any good man might make -- and it may be his last.