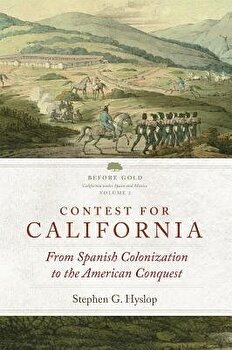 
Description California's early history was both colorful and turbulent. After Europeans first explored the region in the sixteenth century, it was conquered and colonized by successive waves of adventurers and settlers. In Contest for California , award-winning author Stephen G. Hyslop draws on a wide array of primary sources to weave an elegant narrative of this epic struggle for control of the territory that many saw as a beautiful, sprawling land of promise. In vivid detail, Hyslop traces the story of early California from its founding in 1769 by Spanish colonists to its annexation in 1848 by the United States. He describes the motivations and activities of colonizers and colonized alike. Using eyewitness accounts, he allows all participants--Native American, Spanish, Mexican, and Anglo-American--to have their say. Soldiers, settlers, missionaries, and merchants testify to the heroic and commonplace, the colorful and tragic, in California's pre-American history. Even as he acknowledges the dark side of this story, Hyslop avoids a simplistic perspective. Moving beyond the polarities that have marked late-twentieth-century California historiography, he offers nuanced portraits of such controversial figures as Jun pero Serra and treats the Californios and their distinctive Hispanic culture with a respect lacking in earlier histories. Attentive to tensions within the invading groups--priests and the military during the Spanish era, merchants and settlers during the American era--he also never loses sight of their impact on the original inhabitants of the region: California's Native peoples. He also recounts the journeys of colonists from Russia, England, and other countries who influenced the development of California as it passed from the hands of Spaniards and Mexicans to Americans. Exhaustively researched yet concise, this book offers a much-needed alternative history of early California and its evolution from Spanish colony to American territory.