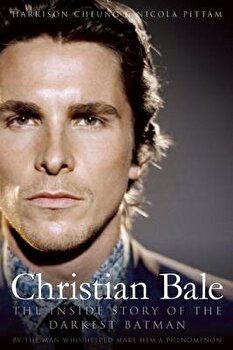 
The darkest Batman is unmasked. During the London press junket for The Dark Knight in the summer of 2008, Christian Bale was infamously accused of assaulting his mother and sister at the five-star Dorchester Hotel. Six months later, a recording of Bale's rant on the set of Terminator Salvation was leaked, and the star's anger began to define him. But beyond his notorious temper, Bale, an Academy Award-winning actor for his role in The Fighter , is known for his ability to physically transform himself for roles in American Psycho, The Machinist, and as one of Hollywood's most revered and bankable characters--Batman. In Christian Bale: The Inside Story of the Darkest Batman , Best Biography winner in the 2013 Indie Excellence Awards and finalist in the 2013 Indie Book Awards, Bale's former publicist and assistant Harrison Cheung--his real-life Alfred--shares an inside look into the little-known personal life of the intensely private and reclusive actor. In the first biography of the Batman star, Cheung, who lived and worked with Christian and his father for 10 years, shares firsthand accounts of the Bales' familial dysfunction, Christian's morbid fascinations and dark humor, and his extreme dedication to his craft. Aware that Bale hated his traditional publicity duties, Cheung launched an extensive Internet marketing campaign for the actor, built the first official actor website for him, and cultivated the Baleheads, an online fan community that was used to garner editorial coverage and ultimately help Bale secure the role of the Caped Crusader. Written with veteran Hollywood and entertainment reporter Nicola Pittam, Christian Bale: The Inside Story of the Darkest Batman uncovers Bale's transformation from shy, English child actor to Internet sensation to Hollywood bad boy. * FOR DISTRIBUTION IN THE U.S. AND CANADA ONLY * About the Author: Meet the real-life Alfred! Harrison Cheung worked for Christian Bale as publicist, marketer, and personal assistant for almost a decade. As a family friend and confidant, Harrison was involved with practically every aspect of Christian's life, including his publicity, finances, immigration, fan mail, and, of course, web marketing. With web marketing, Harrison created the Baleheads - Christian's online fan community - and made him the biggest star on the Internet. Entertainment Weekly touted Bale as one of the "Top Cult Figures of the Past Decade" because of his Internet presence. Born in Scotland and educated in Canada, Harrison has been writing all of his life. His first novel, Idol Worship , was a finalist in the Writers' Guild Fiction competition. In 2002, he produced an award-winning short film called Rising of the Moon , about IRA hunger striker, Bobby Sands. Most recently, his short story, Witness , won Honorable Mention in Glimmer Train's 2010 Short Fiction competition. He is currently working on a series of novels. Harrison is a digital marketing professional at IBM, where he earned an Innovation Award for his work in Internet marketing. He lives in Austin, Texas. Nicola Pittam has been living and working in Los Angeles for the past fourteen years as a celebrity news journalist. She supplies news and features to a variety of publications in the U.S. and the U.K. including The New York Post, USA TODAY, People Magazine, Us Weekly , TMZ, RadarOnline, London Times, The Telegraph, The Sun, The Mirror, Daily Mail, Hello!, OK, Glamour , and Cosmopolitan . She has also written a biography with Angie Best - ex-wife of England's most famous soccer player George Best and fitness trainer to world-renowned entertainer Cher. George And Me: An Autobiography was published in the U.K. by Virgin Publishing in September 2001. Nicola started her career as a writer at the age of 19 when she wrote for her local paper in Northampton, England. She has come a long way since then, including spending almost four years, from the ages of 22 to 26, working for Rupert Murdoch's Sun newspaper in London, which is the highest selling daily newspaper in the UK. Nicola, now 40, still writes for all the British daily newspapers, based in Los Angeles but reporting from across America. In addition, she is working on several scripts including a TV pilot and a YA novel.