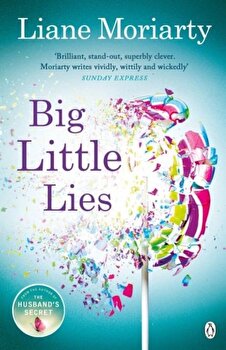 
Liane Moriarty, million copy selling author of The Husband's Secret brings us another addictive story of secrets and scandal. It was always going to end in tears, but how did it end in murder? Single mum Jane has just moved to town. She's got her little boy in tow - plus the secret she's been carrying for five years. On the first day of the school run she meets Madeline - a force to be reckoned with, who remembers everything and forgives no one - and Celeste, the kind of beautiful woman who makes the world stop and stare, but is inexplicably ill at ease. They both take Jane under their wing - while careful to keep their own secrets under wraps. But a minor incident involving the children of all three women rapidly escalates: playground whispers become spiteful rumours until no one can tell the truth from the lies. Which is when the secrets come out - and now someone is going to pay with their life Praise for Big Little Lies: 'Absolutely brilliant, even better than The Husband's Secret. Loved it. Liane Moriarty has that rare Anne Tyler thing of being able to make fun of people while clearly having compassion for them.' - Louise Candlish, Sunday Times bestselling author of Since I Don't Have You  'The author of last year's bestseller, The Husband's Secret, is back with another sure-fire hit. Unputdownable' - The Sun on Sunday  'It's not often that a book about murder mingled with domestic and sexual violence has you howling with laughter, but Moriarty pulls it off here ... Her ironic turn of phrases infuses even poignant moments with humour. Blending romance, comedy and mystery, this is a wonderful book - full of brains, guts and heart' - The Sunday Mirror  ' It's easy to get stuck into this book, thanks to neat plotting that keeps you guessing. Just dive right in because this book slips down as easily as a strawberry soufflé' - Irish Independent  'A brilliantly plotted story with characters to care for who kept me reading, utterly gripped' - Woman and Home Magazine 'Here at Company HQ we're all obsessed with Little Lies by Liane Moriarty. This juicy seaside-town murder mystery will be one of the biggest books this autumn' - Company Magazine  'This fantastically written story, with its little clues casually dropped in along the way, will keep you guessing until the very end ... Another compelling, funny and thought-provoking winner from Liane Moriarty. Do whatever you can to get your hands on a copy - it's brilliant' - Heat Magazine  'Take this page-turner on holiday with you - you won't be able to put it down!' - Closer Magazine  'A twisted thriller' - Now Magazine  'Another riveting thriller. Tackling difficult subjects with intelligence and humanity' - Hello Magazine  'A compelling summer read not to be missed' - OK Magazine  'This addictive new thriller from bestselling author Liane Moriarty weaves three stories together to a shocking and unpredictable climax' - Take A Break Magazine