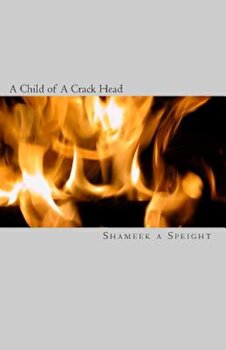 A Child of a Crack Head, Paperback/Shameek A. Speight


He watched as she screamed and yelled with every strike that the man, made to her face. From her mouth, she spit blood that was rolling down her face. He continued to watch the 6'2" dark skin man repeatedly hit and kick the woman in the stomach, again and again. Noooo stopplease stop " as she yelled his closed fist went upside her head. Michael knew he had to do something to stop the man from beating the beautiful brown skin woman, with tears running down his own face he yelled, Daddy stopDaddy stop , as he ran his 6 year old frame between his father and mother. "Daddy stop hitting mommy ," All he felt was his father's big black hands grasp him around his neck and squeeze until he couldnt breathe and threw him across the room. Micheal sat on the floor crying. Partly because of the pain he felt, but mostly because of the beating his mother was getting. How does Micheal, child of a crack head, fight to stay a live ? what will he face and those he truly love ? and do they survive the terror of the man they call Black ice. This story tells the countless beating's, killing's, lies, infidelity and betrayels of a crack head and how a mother and child survive the street life

When a Rich Thug Wants You 4, Paperback/Pebbles Starr

A School for Fools, Paperback/Sasha Sokolov

All the Castles Burned, Paperback/Michael Nye

The Girl with No Past, Paperback/Kathryn Croft

The Visitor: A Psychological Thriller with a Breathtaking Twist, Paperback/K. L. Slater

The Sisters of the Winter Wood, Hardcover/Rena Rossner

It Needs to Look Like We Tried, Hardcover/Todd Robert Petersen