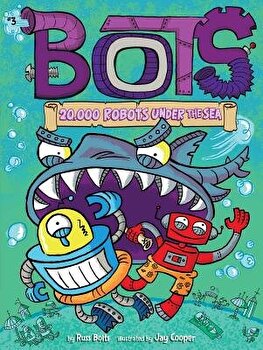 
Description Joe and Rob visit an underwater beach in this third adventure in the hilarious Bots chapter book series Many years ago, scientists on Earth sent video satellites out to the end of the universe to see what was hiding in deep space. Now, years later, these satellites have begun sending their first videos back to Earth...and the stars of the show are two goofy robots. In this story, Joe and Rob are taking a beach vacation with one tiny twist. The robot beach is located at the bottom of the ocean Come along as Earth's favorite bots stumble onto an underwater wreck, a treasure map, and one really friendly robo-shark who won't leave Joe and Rob alone. With easy-to-read language and graphic novel art on almost every page, the Bots chapter books are perfect for emerging readers. About the Author Russ Bolts has always loved robots ever since he was a kid. He lives in New York City with his family and builds robot stories in his spare time. Bots is his first robot series. Jay Cooper has worked as a creative director and designer of magazines, books, apparel. However, nothing makes him happier than creating and illustrating stories for kids. He lives with his wife and children in Maplewood, New Jersey. Visit him at JayCooper.CarbonMade.com.

Angel: How to Invest in Technology Startups--Timeless Advice from an Angel Investor Who Turned $100,000 Into $100,000,000, Hardcover/Jason Calacanis

Robots: Explore the World of Robots and How They Work for Us

You Can Still Make It in the Market by Nicolas Darvas (the Author of How I Made $2,000,000 in the Stock Market), Paperback/Nicolas Darvas

Manifest $10,000: Learn How to Manifest 10,000 by Using the Law of Attraction and Improving Your Money Mindset, Paperback/Cassie Parks

How I Made Money Using the Nicolas Darvas System, Which Made Him $2,000,000 in the Stock Market, Paperback/Steve Burns

How I Made $2,000,000 in the Stock Market: Now Revised & Updated for the 21st Century, Paperback/Darvas Nicolas

How I Made $1,000,000 Trading Commodities Last Year, Hardcover/Larry Williams